The Ultra Low Emission Zone (ULEZ) expands from central London to outer London on 25 October 2021. What does that mean for you and cycling?

What do drivers pay already?

London has had a congestion charge since 2003, covering central London only, which has been shown to reduce the amount of motor traffic in the city centre. It currently runs 7am-10pm daily and costs £15. Since 2019, the same zone also is covered by the ULEZ  to tackle poor air quality. It costs £12.50 per day for vehicles that do not meet the minimum emission standards.

There are also London-wide Low Emission and Direct Vision standards for larger vehicles inside the M25. If the driver of a large vehicle enters London without matching either of these standards they face steep fines.

ULEZ is expanding on 25 October to a much bigger area, going up to, but not including, the North and South Circular roads. Map fans fill your boots: 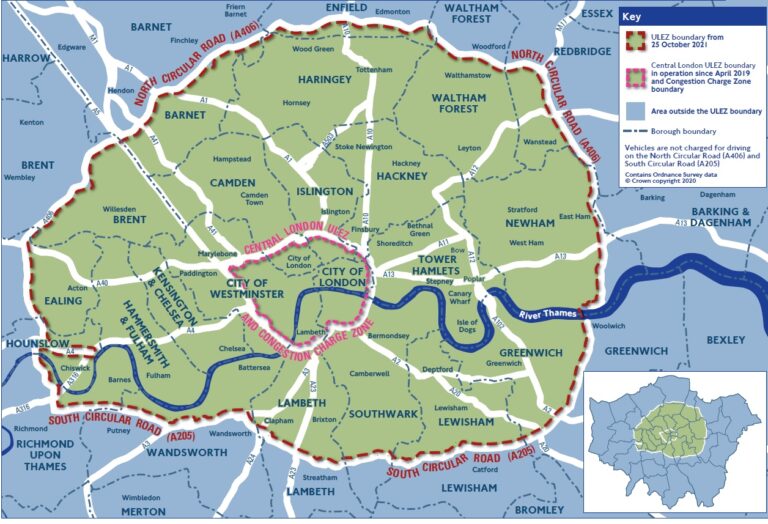 If you’re driving, then you can check if your car meets the minimum emission standards, Euro 4 for petrol cars and Euro 6 for diesel engines here: https://tfl.gov.uk/modes/driving/check-your-vehicle/

There are numerous exemptions including grace periods for Blue Badge holders and taxis; here’s the link for the exemptions page: https://tfl.gov.uk/modes/driving/ultra-low-emission-zone/discounts-and-exemptions

Why the expansion is a good thing

LCC supports the ULEZ expansion because road pricing has a strong record of reducing motor traffic volumes as well as harmful emissions and pollution levels. The existing ULEZ zone has already reduced NO2 levels in central London by half. We urgently need to do this across London to make it safer for people cycling, walking and wheeling, to improve air quality, and to meet targets for a liveable climate.

Fuel duty has been frozen for 12 years now, while the costs of more sustainable transport options have gone up enormously. We believe that TfL is quite reasonable in asking drivers to pay at least a fraction of their ‘external’ costs to society, as well as ensure TfL can continue to roll out improvements to streets for other modes. More, making driving a bit more expensive also promotes alternatives to driving. The stark reality is that ‘mode shift’ to more sustainable modes does require both ‘carrots’ and ‘sticks’. Just making cycling a lot nicer doesn’t get most people cycling – that happens when cycling is cheaper, more comfortable, quicker and safer-feeling than motoring.

If there is a downside to the ULEZ, and it’s one that’s visible all over social media right now, is that it adds yet another charge to an already complex set of overlapping charges and boundaries – and this could be made even more complex if a mooted boundary charge for those driving in from outside London becomes a reality.

There is a dire need now for a simpler, fairer system across all of London. “Smart road-user charging” could charge by time of day, location, engine type and even other factors (charging more for a short trip, for instance). This would be simpler for everyone, could more successfully target the most unnecessary motor vehicle journeys being made and the most polluting ones, as well as serving not just to give TfL a stable funding stream that would reduce its reliance on the government (something the government is very keen on). Just about every expert, think tank and many politicians are talking about smart road-user charging now. And indeed, it seems likely that if Sadiq doesn’t move forward with it fairly soon, the government will – and take any monies generated for themselves, to plug the gap in their finances that the shift to electric vehicles will create in Vehicle Emissions Duty (VED).

This is why Smart Road User Charging is one of the asks of our Climate Safe Streets campaign. Smart Road User Charging is just one of the key recommendations of LCC’s “Climate Safe Streets” campaign to decarbonise London’s roads by 2030. Read more of the actions we are asking the Mayor and local boroughs to take here: https://www.lcc.org.uk/climate-safe-streets/

We hope and believe that an expanded ULEZ will help reduce not just pollution, but also overall motor traffic volumes. This represents again an opportunity to see more people embracing cycling, escooters, ebikes, cargo ebikes, walking and public transport to replace car journeys. But it is too early to tell how much traffic reduction we will see, how many non-compliant cars are now owned in or near the zone or will regularly travel into it, and indeed whether there will be any displacement of more polluting vehicles onto the north and south circular or beyond. Whatever the final result, it is likely far more will be needed on top of the ULEZ expansion, and fast. Regardless, the ULEZ expansion is a major and bold step in the right direction for London.

Blog
Campaign
Climate Safe Streets
Cycling Infrastructure
Health
Road Danger Reduction
We use cookies on our website to give you the most relevant experience by remembering your preferences and repeat visits. By clicking “Accept All”, you consent to the use of ALL the cookies. However, you may visit "Cookie Settings" to provide a controlled consent.
Cookie SettingsAccept All
Manage consent