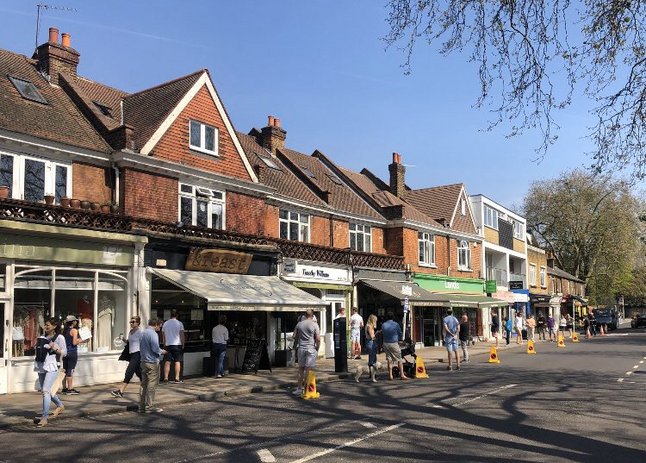 Barnes, where they have reallocated parking spaces to create a safe place to queue for the shops. Photo credit Charles Campion

It is increasingly clear that many people are walking and cycling in the current crisis for their necessary journeys, as key workers and for exercise, rather than risking public transport or using a car. It is also, however, increasingly clear that quiet roads and lots of people walking and cycling hasn't completely in itself transformed our roads into welcoming spaces. Incidences of speeding among those still driving are way up, and narrow pavements on residential streets and particularly on our shopping streets, often both with parking on the pavement too, are causing real issues for many too, we urgently need the mayor, TfL and London boroughs to look at how they can enable people to stay safe during this crisis while moving about.

We've already publshed a blog on how they can act now, and how after the lockdown lifts, we can avoid a return to the same, or possibly even more motor traffic. And we are keeping our eyes on how other cities grappling with the same issues. You can read our current recommendations here: https://lcc.org.uk/articles/cycling-and-the-covid-19-crisis

There are a growing number of cities to take examples from. In Colombia, Bogata has turned 50 miles of traffic lanes into emergency bike lanes. Berlin, Milan and New Zealand are also following suit, closing roads and giving space to walking and cycling. Closer to home, Brighton, are also closing roads in direct response to the crisis, to help their residents stay healthy.

TfL are looking into a number of measures to create safer conditions for people walking and cycling, such as reallocating more space – widening pavements, creating temporary bike lanes or adjusting traffic lights to make it easier to get through junction on cycle or foot. This is exactly what we at LCC  have been calling for, and would be a massive boost for people walking and cycling.

However, so far, the main action TfL has taken is suspensions of key traffic control measures – the Congestion Charge and Ultra Low Emission Zone. We’d need to see them reinstated as soon as possible once the lockdown lifts.

Hackney were the first council in London to announce they would be filtering certain residential roads, making them access only for cars, to keep their residents safe and ease the pressure on their green spaces. These plans were shelved, however, because despite the easing of consultation notice requirements by law, it is not in the council's hands to implement emergency measures without going through consultation processes. As such, it is currently limiting itself to the widening of pavements.

Lambeth has confirmed emergency action on wider pavements, cycle tracks and low traffic neighbourhoods. Lewisham is taking emergency action on low traffic neighbourhoods.
Hackney is introducing a package of emergency measures to improve road safety and social distancing throughout the pandemic.
Richmond is for building an "post-Covid transport action plan" to "make sure that active travel... remain and improve as options within our borough."
In Hammersmith and Fulham as well, pavements in busy shop areas are being temporarily widened to help with social distancing.

Some cities have taken strides in delivering measures such as emergency cycle lanes and widened pavements to ensure people walking and cycling can get around safely during the global crisis, and some are thinking ahead to what happens are lockdowns are eased. Below are some of the most notable examples:

Bogota, Colombia – In Bogota, the Ciclovía scheme, which turns over 75 miles of streets to cycles one day a week was extended to operate all week, and a further 50 miles of temporary bike lanes were put in place in response to the coronavirus.

New Zealand – New Zealand is the first country to provide governmental funding for emergency measures for walking and cycling. Local authorities are able to apply for funds to implement temporary cycle lanes and the widening of pavements.

Lombardy, Milan, Italy – The Strade Aperte plan will transform 22 miles of streets to include temporary cycle lanes, new and wider pavements, 20mph speed limits, and pedestrian and cyclist priority streets. The work will be done over the summer and looks to enable safe cycling and walking as lockdown restrictions are lifted.

Berlin, Germany – New emergency bike lanes have been put in place around the city, marked out by signs, cones and barriers. They are intended to be temporary …

Paris, France – The Paris region will spend €300 million on a 650-kilometer secured cycle network, including temporary facilities beginning May 11 designed for life after the pandemic.

Budapest, Hungary – Temporary bike lanes are being installed for several key routes around the city, on the edges of multi-lane roads in each direction. The initial plan is that these remain in place until September.

Minneapolis, Minnesota, US – More than 18 miles of road around lakes and the Mississippi River has been closed to car traffic. Joggers and pedestrians are able to use the streets, while cyclists are required to use the cycle paths.

Keep an eye on this blog for updates on what London and our boroughs are doing for walking, cycling and motor traffic as this crisis unfolds, as well as notable international examples.