The AGM is where LCC sets its agenda for the year ahead - it’s where our trustees are elected and big, guiding decisions are made.

The AGM is where LCC sets its agenda for the year ahead – it’s where our trustees are elected and big, guiding decisions are made.

We’ll publish details of the next AGM when details are available. You’ll also find information and important records from our past AGMs below.

Guided by our members

Each year at the AGM our members get the opportunity to shape the direction of LCC's activities over the forthcoming year.

A list of motions from our recent AGMs can be found below.

Policy on One Way Streets Noting that the LCC Policy Forum agreed a document (http://lcc.org.uk/uploads/9508) on one-way streets on 29 July 2015 that stated: 1. Two-way cycling should be the default on London’s streets; and 2. The question of whether streets should be two-way or one-way for motor vehicles should be decided on a case-by-case basis, LCC now resolves that: 1. We will support schemes that restrict motor vehicle flow to one direction to allow the creation of high quality Space for Cycling, and will support one-way schemes that are designed to remove through-traffic, provided speed limits are 20mph (or lower) and adequate attention is given to quality of the pedestrian environment. 2. If there are conversions from one-way to two-way working of roads carrying more than 2000 PCU per day, we will demand that each pair of parallel roads should, between them, provide protected Space for Cycling in both directions. 3. We will press for the improvement of existing one-way systems via speed reduction measures, introduction of two-way cycling and improvement of pedestrian crossing facilities. Presumed Liability We believe that the number of fatalities and injuries to London cyclists is unacceptably high. Currently, those injured, or the families of those killed, go through an often harsh and protracted process to gain much needed treatment, care, or compensation. We note that versions of a Presumed Liability rule exist in the civil law of most European countries. Apart from the UK the other exceptions are Ireland, Malta, Romania and Cyprus. Presumed Liability means that in civil actions after a collision with a cyclist or pedestrian, the motorist would be presumed to be at fault, unless they could prove that they were not to blame. It would not mean the motorist was criminally liable: it would just be for the purposes of compensation. Presumed Liability would deliver fairer and faster justice for injured vulnerable road users. We call on the London Cycling Campaign to campaign for Presumed Liability to be incorporated into law, and to work with other organisations involved in campaigning for Presumed Liability.

Buses and Bicycles LCC notes: Policies passed at the 2013 AGM say we need inclusive cycling environments on a dense and direct core cycle network. Policy includes a test for when we think protected space is needed: where speeds are over 20mph, or daily motor traffic volumes over 2,000 Passenger Car Units. LCC's Policy Forum has been discussing bus-bicycle interaction, triggered by concerns that creating space for cycling will cause problems for buses. This motion is informed by a Policy Forum paper, available at http://lcc.org.uk/pages/current-projects . LCC resolves: 1. Where the core cycle network coincides with a bus route, usually the 'protected space' test will mean we need to separate bicycles from buses, at route level or at street level. 2. Separation at route level can mean re-routing buses (for example, to create a cycle-only street, as in The Narroway, Hackney), or re-routing the core cycle network. If the second option is chosen, this must maintain network density and directness, and access to key destinations. 3. Where buses and bicycles are separated at street level, we want high quality cycle tracks or protected lanes, which cater for the increases in cycling they will generate. Protected space must continue safely through junctions and past bus stops. 4. We do not believe this stance creates conflict between bus and bike provision. The current situation has put cyclists at risk: buses seriously injure as many cyclists in London as lorries do. Mixing high bus and bicycle flows delays both, although this is not taken into account in modelling. 5. Separating bicycles from buses has important wider benefits. It will create safer, more pleasant cycling environments, encouraging more bus users to cycle some short trips, with big health gains. This can reduce overcrowding on buses and create capacity to shift other trips from car to bus. 6. Planners should not assume creating space for cycling threatens buses. It should be considered an opportunity to prioritise both buses and bicycles over less efficient modes. Buses and Modal Share in Central London Noting: 1. The history of cycling campaigners supporting provision for buses as beneficial for walking and cycling (by reducing demand for private car use). 2. Figures published by the Greater London Authority showing that buses now cause more cycling KSIs per km travelled than HGVs. Reference: "News from Darren Johnson AM: Buses as dangerous as lorries for cyclists, but not as fatal", 11 April 2014, https://www.london.gov.uk/media/assembly-member-pressreleases/green-party/2014/04/news-from-darren-johnson-am-buses-as-dangerous-as-lorries-for. 3. Figures published by the Greater London Authority in the Mayor's Air Quality Strategy (December 2010) showing that buses are a significant, and growing (as a percentage of total particulates) source of air pollution in Central London. 4. Recent road schemes in Central London, such as Camden's proposed West End Project have sought to justify inadequate provision for cycling on the need to improve or maintain provision for buses and existing bus and cycling modal share. Defining 'Central London' as the area within the "Inner Ring Road", LCC resolves to: 1. No longer automatically assume that increasing, or even maintaining, provision for buses in Central London is beneficial for walking or cycling. Nor to automatically accept that such provision for buses is a legitimate reason to accept poor provision for cycling. 2. Campaign for TfL and London boroughs, in every Central London road scheme, to actively consider opportunities for modal shift from buses to cycling, through the provision of high quality 'Space for Cycling'. Highway authorities should design cycling provision for the modal share likely when there is high quality provision, not based on current modal share, which is suppressed by poor provision. 3. Seek integration of tube and bus fares (including daily Oyster / Contactless price-capping and Travelcards) with TfL Cycle Hire so as to eliminate the financial incentive that commuters have in choosing to get a bus over hiring a cycle for the final part of their journeys into Central London.

LCC Policy on use of cycling facilities The LCC notes an increase in the number and diversity of people cycling on an increasingly wide range of cycles. The LCC believes that people should have the right to make an informed judgment whether to use cycle facilities or the (rest of the) carriageway. It therefore opposes any attempt, whether through the legal system or otherwise, to compel people when cycling to use cycle facilities. LCC Policy on standard of cycling facilities The LCC further believes that substandard cycle facilities can be worse than no facility at all and that the lack of minimum standards is leading to poor quality facilities, some of which are so bad that they are unsuitable for cycling in at all, besides increasing tensions with other roads users who may not understand why people do not wish to cycle in them.

The following policies have been adopted by the London Cycling Campaign as a result of decisions by the Board or by its subcommittees; following a Board resolution these policies, like AGM resolutions, are also binding on the LCC as a whole, including local groups, representatives and Trustees when speaking on behalf of the LCC.

Space for Cycling Agreed by the Policy Forum at 29th January and 26th March 2014 meetings, and accepted by the Campaigns & Active Membership subcommittee and the Board as the policy basis for the Space for Cycling campaign.

We hold our Annual General Meetings once a year, to communicate with our members, give a round up of the year’s events, plan future ones, and take any comments or suggestions.

Our AGM Standing Orders give instruction on how we do so.

Note that AGM Standing Orders have been temporarily been suspended by the Board, for purposes of running a virtual AGM in 2020 due to Covid-19 restrictions.

Minutes from previous AGMs are below: 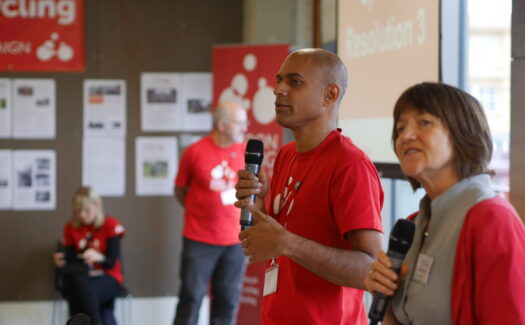 Member-led and with a dedicated staff team and Board of Trustees. Find out more about how we operate here.
Find out more 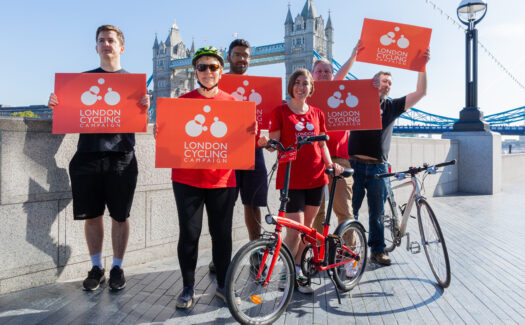 LCC is only effective because it's supported by more than 10,000 members. If you cycle in London please consider joining - help make LCC's work possible and get some fantastic benefits too...
Find out more LCC has a group of active members in every London borough - they campaign for local cycling improvements and also run rides and events.
Find out more 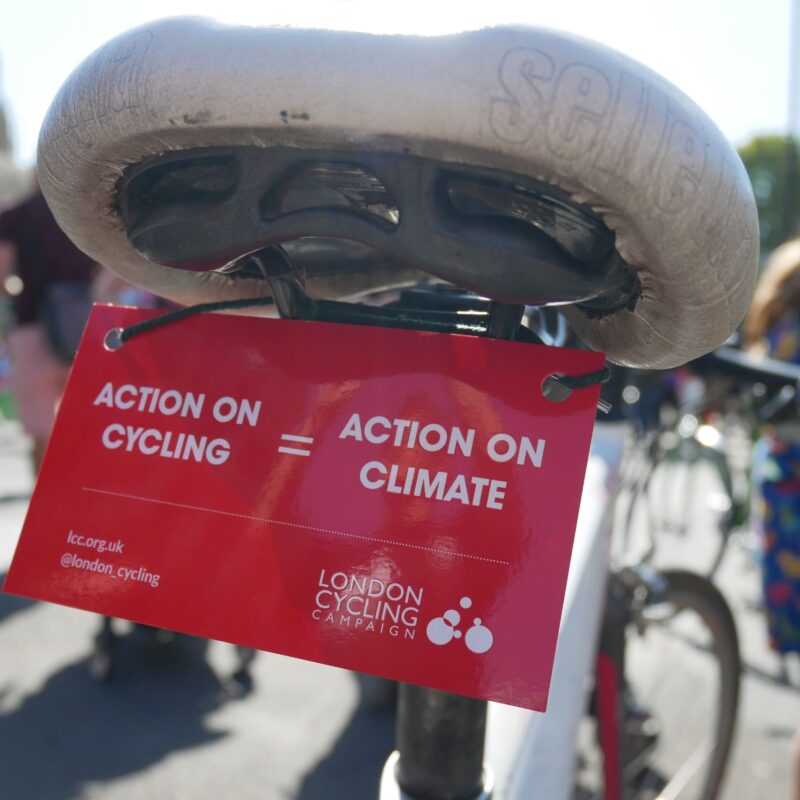